The fog covering the skies cannot shield your vision from seeing  the grand monumental building that lies ahead. As you drive on  the paved 4 lane highway, it is immediately hard to observe the other cars driving by, but instead all you can do is fixate your eyes on the big white domes and large complex. The Grand Mosque of Sheikh Zayed bin Sultan Al Nahyan is a mosque that demands humility, and a symbol of pride for Abu Dhabi and the United Arab Emirates (UAE).

Established in 2008 by decree issued by HH Sheikh Mansoor Bin Zayed Al Nahyan, Deputy Prime Minister of the UAE, Minister of Presidential Affairs, the establishment of the mosque aims to serve three goals: to commemorate the legacy and noble deeds to humanity of the late Sheikh Zayed bin Sultan Al Nahyan, to cooperate with research, religious, educational and cultural institutions and centers, and finally to enhance cross cultural communication and introduce the mosque’s center as a cultural tourist destination. 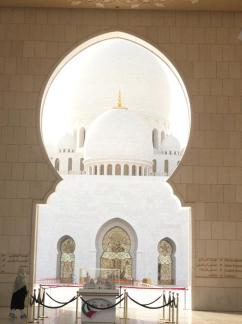 The grandeur of the complex before you bring to the visitor a sense of humility and instills in the soul of spiritual persons, such as myself, a feeling of devotion and solemness. The mosque is surrounded by green grass, and around its parameter is surrounded by fountains and pools that reflect the structure and the domes, as well as give the illusion you’re in the garden of Eden, or a ship that sailed through time to the Ottoman Empire’s Golden Age .  At the entrance to the mosque’s Saha (courtyard), you face a frame like structure that places the grand dome within it, in addition to a glass box containing the small architectural model of the mosque complex.

The 82 domes of the mosque, of various sizes, come into full view as you step into the Saha and admire the surrounding, your eyes are immediately drawn to the flower designs on the ground leading you to the entrance of the prayer hall. The experience from this point begins as soon as the call to prayer sounds, and you head inside to pray or observe. The structure was welcoming and salutes all the visitors and demands respect, leaving the onlooker in awe.

The Sheikh Zayed’s Grand Mosque is one of the destinations that should be on the list for tourists visiting the United Arab Emirates. While Abu Dhabi’s neighboring commercial and tourist city Dubai takes much of the attention, real treasures such as the Grand Mosque must be explored as well. 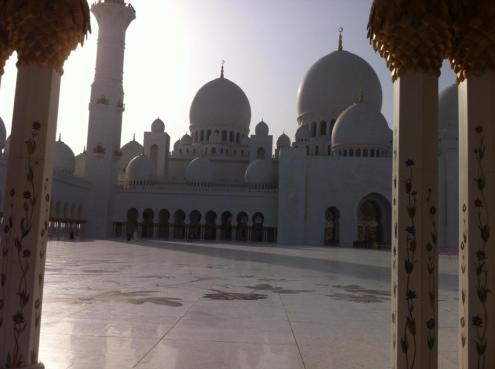