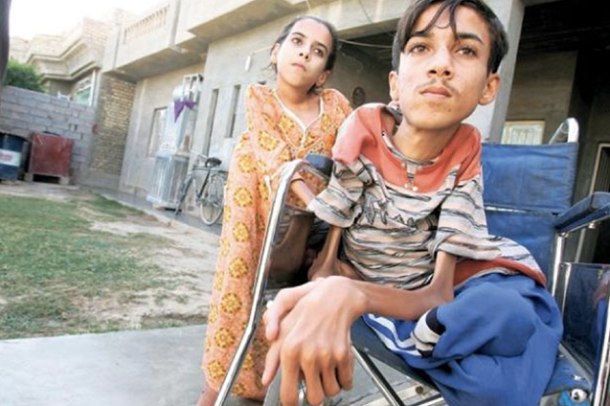 Though no atomic bomb was involved in the war, the effects of war on Iraq have resulted in equal, if not worse, health consequences compared to those following Hiroshima in World War II. According to a study released by the International Journal of Environmental Research and Public Health, “the increases in cancer, leukemia and infant mortality and perturbations of the normal human population birth sex ratio in Fallujah are significantly greater than those reported for the survivors of the A-Bombs at Hiroshima and Nagasaki in 1945.”

The genetic damage and health issues in Fallujah, Iraq are now being referred to as the “Iraqi Hiroshima.” There has been a 12-fold increase in childhood cancer within a 5-year period, with those the ages between 0-14 most affected. Infant mortality is high and the alterations in the population birth sex-ratio is significant evidence for genetic damage. In normal populations, the ratio is usually 1050 boys born for every 1000 girls. In 2005, this ratio in Iraq was diminished to 860 boys per 1000 girls.

Birth sex ratio is a tell-tale sign of genetic damage because the reduction in boy births is due to the fact that girls have two X-chromosomes and can afford to lose one through genetic damage. The sex ratio was similarly reduced in the Hiroshima following World War II.

Recent research on the dramatic spike of genetic damage has linked these birth defects to the contamination from U.S. weapons and depleted uranium munitions from the war, but this has not been confirmed. In 2004, Fallujah underwent two massive US bombing campaigns, and Fallujah is now seeing the highest rates of birth defects in Iraq. The U.S. and British forces released a approximately 2,000 tons of depleted uranium ammunitions in Iraqi cities in 2003.

The Iraqi people may be experiencing the aftermaths of this war for many generations to come.