Wellesley and the World 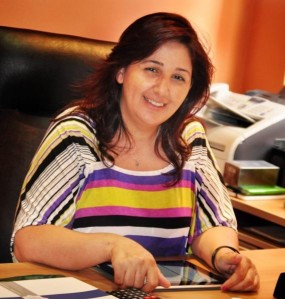 is a respected journalist in Jordan. The Wellesley Globalist conducted an interview to learn about her experience in Journalism and her opinion as a woman of the Arab Spring.

Q: Basma Salaitah, who are you?

A: I am a Jordanian woman and a mother of three. I studied Media & Journalism.  I used to love creative and reflective writing up until I got to university where I insisted on studying journalism. I used to do video reports despite my father, may his soul rest in peace, who used to reject my choice of study. I continued with journalism and voluntarily contributed to my university and my professors the work I’ve done to prove myself. When I got married, everything paused, but it feels good to be back. After 20 years, my life as a journalist began.

Q: How did it all start for you?

A: it started 5 years ago in actual journalism thanks to the support of the Arab Jerusalem office and Mr. Bassam Badrayn. I began with journalistic writing for the first time, as I specialized in journalism and media.

Q: Did you face challenges and difficulties from your local community for choosing this field?

A: Yes, I faced a lot of objections, especially from relatives, but I also found my supporters and encouragers. Right now, I still face objections and threats due to my transparency and honesty in writing.

Q: What’s the main subject that captures your attention or you feel passionate about?

A: I am a strong believer in the issues of the street or the people, their problems, and working on following through with them and solving them through my pen. In addition, I have great interest in issues pertaining to the elderly, handicapped, and orphans. They are the people that I really hope to help and work hard to do so. I am also very interested in volunteer work to help families in need, and of course supporting the unemployed youth.

Q: Tell us about your career path? And what are your current activities?

Right now I’m a journalist for online newspapers, one of which I am the Editor-in-Chief of. In my beginnings I started working with children in the institution of teaching. After that, I worked at my father’s company and in the entertainment business. Then, I found my way working as a receptionist at a country club. Finally, I worked as a saleswoman for one private company for personal reasons, and from there I started working within my specialty, within my field, and within my identity. I didn’t find myself except in Journalism.

Right now, I am a member of Transparency Jordan; I lead volunteer missions to help those in need and the unemployed youth. I pursue my work through being present during events, and to be able to be a first-hand writer through my independent pen-ship, to project and reflect the reality of things with all honestly. Despite difficulties, I was able to work on monitoring the elections for the institute of teachers through the Transparency Jordan team. Right now we are working on preparing ourselves to monitor parliamentary elections that are coming up soon.

A: I am the official media spokeswoman for Transparency Jordan, I cover most of the activities, and right now I am on the Awareness and Education Council to spread awareness about corruption to students in schools, universities, and women. However, the little attention and funding we receive poses great obstacles for us. We cannot, as a group, depend on the members only; the community must be involved, and right now we face resistance

Q: Do you face many challenges as a group?

A: Yes we do, especially issues pertaining to corruption

Q: What’s the role of Transparency Jordan in maintaining stability in the country?

A: We consistently work as a civilian community to support anti-corruption. More importantly, we are careful to follow up with corruption cases we investigate, and insist on filing those cases to the Anti-Corruption Council in Jordan. We also have a role in spreading awareness, which gives the psychological stability to the people and especially to the youth by giving them more information. I believe knowledge is security.

Q: Today, in light of the Arab Spring, how do you describe your responsibility or mission as a Jordanian woman in journalism?

A: My mission is to reflect the true image and bring to reality the true story without adding to or manipulating the truth. I focus on educating women to transcend difficulties, and to raise their voices to have a bigger impact and role to pass through the Arab Spring with transparency and minimum loss.

Q: Do you think the voice of women is heard in this revolution?

Q: What does the Jordanian woman need to look forward to after the upcoming parliamentary elections?

Honestly, the Jordanian woman doesn’t look forward to anything related to elections and politics in Jordan, but what she needs is a space to be free, to embark on her own journey in life, she needs who supports her financially, in her career, and also to provide her with motivation. The Jordanian society has, unfortunately till now, little regard for women especially in terms of elections. We still are at the beginning of our journey, and of course the most important reason behind this is that the Jordanian woman herself is not aware of the importance of her participation in parliamentary elections. There is complete reliance on men, which limits her freedom.

Q: What do you think of the Jordanian woman inability to pass the citizenship right to her children?

A: Of course, that is a form of oppression to women. Women are not regarded as equal. They say to us, we gave you all that you wanted, but in reality they gave us what “they” wanted. However, the Jordanian women’s right to keep their children through citizenship hasn’t been given, and that is a foundation to injustice and the reality of women in Jordan

Q: As a Jordanian woman who is also a Christian, what are the demands of Christians in Jordan and the Arab world from the political regimes?

A: This is a complicated question, however as a Jordanian Christian woman, I live in an environment that used to be predominantly Christian but now we are a minority in the town of Madaba. I always say, continually, that as Christians, our rights are not given, no matter how much discussion is given to the agreement of religions. We are instead very limited in the way we can dress in public and in our liberty to go out at night for example. However, I’d like to thank the leadership of His Majesty King Abdullah the Second as well as his late father King Hussein for their care for the Christian community in Jordan and for their intolerance of any violation against us. However, we don’t have our entire rights from the government itself and the seats in parliament. We are a minority in an Islamic country.

Christians demand security and peace as a foundation for our lives as it is important for any other person, Christian or not. Christians in Jordan are very loyal and will always support the leadership of His Majesty, and we do not see ourselves as objectors to his leadership to us. However, change is important to include all sects and religions in the Jordanian society.

The Interview in Arabic here.